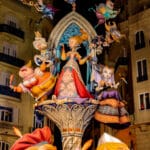 Las Fallas is a celebration like no other in the world. Firecracker detonations, parades of Spaniards dressed in their traditional costumes, fireworks, huge monuments, and thousands of flower offerings to the Virgin Mary.

This and more is the focus of this 5-day fiesta leading up to the 19th March, the feast of St. Joseph, the patron Saint of Valencia, a city situated on the east coast of Spain.

In this post, you will find all you need to know about Fallas in Valencia including a program of these festivities, a bit of history, what to expect, and our own opinion.

What is a falla?

It is a large monument of figures called ninots. These monuments – fallas are to be found on the streets all over the city during the festival. Awards go to the best ones but no matter how beautiful they look, they all will be burnt down on the 19th March.

The program of Fallas festivities in March

This is to show you what you can usually expect on those days when the fiesta takes place in spring (without any restrictions):

15th March: The Planta – All monuments must be assembled by the morning of 16th March + fireworks.

17th March: In the morning, the falleras mayores arrive in a procession at Plaza del Ayuntamiento and collect their prizes. In the afternoon, Ofrenda del Flowers (flower offering) takes place with Spaniards dressed in their traditional outfits who will be bringing flowers to the Virgin of Mary. Fireworks are not to be missed.

18th March: Nit del Foc (Night of the Fire) in the early hours and flower offering in the evening.

19th March: The Crema – burning of fallas with the winning monument being burnt last at about 12:30 am right before the not-participating structure at the Town Hall Square is burnt.

Plus, every day from 1st to 19th March firecracker shows take place at the Plaza del Ayuntamiento!

This year, due to the restrictions still in place (and after having no Fallas fiesta in 2020) the festivities were postponed until the end of August with the main events taking place at the beginning of September.

The public was not allowed to attend the Offering of Flowers and instead, all main TV channels were broadcasting it live.

On Friday, 3rd September the “Offering of Flowers” procession took place from 5 pm till midnight.

On Saturday, 4th September, falleros and falleras kept bringing the flower offerings from 9 in the morning until midnight.

The origin of Las Fallas

In the old times, carpenters had a tradition of burning wood while celebrating the arrival of spring on 19th March. They would also burn other items they had no use for (like furniture) which would apparently make the flames look like human figures.

What are fallas made of?

Originally, these gigantic monuments were made of wood, paper, and paper-mache.

However, these days they make most of them from styrofoam.

They are not made from cork as some articles may tell you! Styrofoam/polystyrene is often called white cork in Spanish but it has nothing to do with the real cork!

What do the falleros anf falleras wear?

Women’s dresses vary from “fallera” to “fallera”. These days it can be hard to say which ones are the traditional outfits as many parts were “customized” and combined and underwent many changes over time. In general, they were based on the fashion of the 17th-18th century.

In the 1960s the dresses were shorter, then they went back to ankle-length. Nowadays, they are more pompous than the traditional dresses were.

These dresses are made of silk (Valencia is known for high-quality silk) and consist of a voluminous skirt and corset. Many add an apron and scarf.

They wear handmade shoes and their hair must be braided into 3 buns. Nice jewelry and a beautiful Spanish veil compliments their outfit.

Men wear usually shorts with knee-length socks, a white shirt, a colorful vest, and a scarf or hat on their head. One of the obligatory items is the so-called “faja”. This is a sash (long rectangular scarf) that they wrap around their waist.

Dressing of the Virgin

Thousands of Spaniards walk kilometers (miles) in a parade to get to Plaza de la Virgen square in the historic center of Valencia, dressed in their traditional costumes.

For many, arriving at this square and offering flowers to the Virgin Mary is an emotional event and often you will see them crying as they pass the giant structure of the Virgin Mary. Whole families including kids as well as toddlers take part in this event that is so important for them.

Carnations are probably the most used flowers to fill the empty wooden structure of Virgin Mary. The color of her cape is every year different but white and red are always incorporated. By midnight on the 18th March, the 15-meter high statue of Virgin Mary.

What is La Crema?

The Fallas of Valencia festival finishes with burning (La Crema) of the fallas – the statues that falleros and falleras had been working on the past year and presented to the public only a few days prior.

These beautiful sculptures are truly a work of art of all those involved and usually represent some kind of a satirical scene.

Burning them is quite a controversial topic these days. Most of them are made of styrofoam that produces black smoke when burnt which is pretty much a toxic hazard for anyone there.

P.S.: The official tourist website of Valencia has each year up-to-date information about this event.

Our opinion and personal experience:

We witnessed this celebration first-hand a few years back and this year, we watched it on TV. We both think it is a one-of-a-kind event that you will not see anywhere else in the world.

The large wooden structure of Virgin Mary “dressed” in fresh flower bouquets, the thousands of Spaniards wearing beautiful costumes, the gigantic fallas – the statues/monuments that they present to the world and burn shortly afterwards…

That being said, the burning of fallas (La Crema) is something we were actually shocked to see as we felt like we were the only ones there not being able to breathe at all.

The thick smoke coming from the burning that goes on and on for hours and happens all over the city comes from the styrofoam which is toxic when burnt and truth be told, even if it wasn’t it makes it so hard to breathe that we recommend you skipping the La Crema part. And definitely, it is not something you would want to bring your kids to.

Instead, go watch the fireworks, walk around the city to see the monuments the falleros created, and watch the parade of dressing of the Virgin.

If you are staying in Valencia or in the area and wondering where to go and what to see, I have a few tips for you: