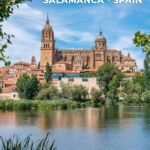 Planning a trip to Spain and thinking of visiting Salamanca? This list of top things to do in Salamanca covers all the best places to see and also includes resources.

Find the best things to see in Salamanca, Spain with this travel guide. Resources with up-to-date links to monuments as well as quick info on prices and opening hours are below!

This university city lies about 200 kilometers (120 miles) west of Madrid, Spain’s capital. Whether you are planning a road trip through Spain or thinking about doing a few day trips from Madrid, you should add this city to your list.

And if traveling through Portugal, what might also interest you to know is the fact that this Spanish city is only 80 kilometers/50 miles east of the border with Portugal. If you are nearby, I recommend you plan a day trip to Salamanca!

The best things to see and do in Salamanca:

The Salamanca Cathedrals – a must-visit place! There is a new and old cathedral, both built right next to each other so visiting the new one means you will be passing through the old one as well. And the old part was our favorite for how unique and different it was.

Ieronimus Tower – The ticket gives you access to the tower of the old cathedral. You will be able to climb up, check out the bells, the vault room, and have a bird’s eye view of Salamanca from one of the open “roof balconies”. You can also walk the inner triforium of the new cathedral which was pretty epic.

The University of Salamanca dates back to the 12th century and it is one of the oldest universities in Spain. It is also a place where Christopher Columbus would give lectures about his discoveries!

Travelers to Salamanca, especially students who stop at this building like to look for a frog (the symbol of the city that you can find in every souvenir shop as well as buy it from street sellers). It is said that if you spot it on your own you will have luck at exams the following year, I believe.

Plaza Mayor is the heart of the city with restaurants, ice cream shops, and souvenir shops pretty much everywhere you look. It was built in the 17th century for bullfighting and used for that purpose for 100 years.

Palacio de Monterrey – a residence of Duke of Alba, this palace is now open to the public including their private areas with kitchens and sleeping quarters for the workers. It is still lived in and used to date by the family of the House of Alba.

Casa de Las Conchas – or the House of Shells in English, was built by Rodrigo Arias de Maldonado, a professor at the Salamanca University as well as knight of the Order of Santiago de Compostela. The works on this historic building started at the end of the 15th century and finished at the beginning of the 16th century.

The house is covered with over 300 shells, the symbol of the Order of Santiago as well as Camino de Santiago (The Way of James pilgrimage route to Santiago de Compostela). Part of the building houses a library now and you can visit its courtyard for free!

Automobile Museum – if you are into classic cars, this place has a good collection of vehicles from countries like Spain, Italy, Germany, and the USA. The museum is located near Hotel Casino de Tormes and from there you also get the best photos of Casa Lis.

Roman Bridge – Puente Mayor del Tormes is a well-restored bridge from 1st century BC that was once on the Via de la Plata route (the Silver Way) that connected the south of Spain (Merida) with the north (Astorga). Until the beginning of the 20th century, it was also the main access to the city.

Casa Lis – Once a mansion, now an art nouveau and art deco museum. To get the best view of the building, walk down towards the Museum of Cars. From there, you can see the beautiful glasswork.

Convento de San Esteban – You will find this Dominican monastery on Plaza de Concilio Trento. It is said that Christopher Columbus stayed here when he came to defend his idea of sailing west to the Indies.

La Clerecia – Located right opposite the House of Shells, it is a must-visit site. The construction of this Baroque-style building began in the 17th century by order of the wife of Philip III of Spain (Queen Margarita of Austria). It had 2 sections: a public with a church and school rooms and private with rooms where monks lived.

The Cathedrals of Salamanca – The website is in Spanish only but you can see the opening hours at the bottom of their main page. The entrance was 6 euros for adults. We arrived after 10 am on a weekday and they let us in for free. Not sure what the reason was as they were charging from 11 am. It is money well spent though!
Ieronimus Tower – You can choose between a Day Tour or a Night Tour. We opted for the day tour. The adult ticket was 4 euros (as of 2021) which I thought was a reasonable price for what you get to see. Kids 10 and under go for free but when booking the tickets online you still need to count them in.
Palacio de Monterrey – Monterrey’s Palace website has information in Spanish, English as well as French. With this site, I recommend booking the tickets online as they do tours only a few times per day with limited spaces. When we showed up during the weekend, they were fully booked. They are also closed on Mondays and Tuesdays. A tour takes about 50-60 minutes.
Car Museum – The website is in English as well. Make sure to check the opening hours and plan accordingly as there is a siesta (break) between 2-5 pm.
Casa Lis – there is no option to change the language on their website. To check the opening hours: go to “Informacion Practica” on top of their page, click the “Horarios” for times or “Entradas” for ticket prices.
Monastery of San Esteban – At the bottom of their homepage, you can find the opening hours. It’s in Spanish only. At the moment, they are open daily from 10 am to 2 pm and from 4 pm to 6 pm. The museum seems to be open in the mornings only. Remember, Mondays the museum is closed!

We did enjoy our trip to Salamanca a lot. We liked that all the main places of interest were close to one another, so you had plenty of time to explore the city without having to rush everywhere.

The highlights of our visit were the Salamanca Cathedrals and the Ieronimus Tower.

The Monterrey Palace was also interesting but as I have mentioned it is closed on Mondays and Tuesdays and seemed very busy on Sundays.

With the Clerecia, we decided to buy tickets only to the towers (Information about the options is right at the ticket office which took us awhile to figure out). From up there, you get nice views of the cathedral which might be hard to capture in full on your camera for its size.

The city is extra busy during the weekends, especially in summer so keep this in mind when planning a trip to Salamanca, Spain.

This is it for now and I hope you will find some valuable information here.