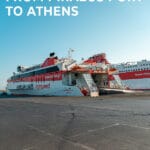 Arriving at Piraeus port and need help with transfer from Piraeus port to Athens? This guide will explain you all you need to know about the port of Piraeus and how to get from Piraeus to Athens including valuable tips (I wish I’d known before I arrived).

Now, you can get from Piraeus port to Athens by various means of transfer.

It is entirely up to you what you choose but let me tell you a few facts about Piraeus Port and getting from Piraeus port to Athens first. Then, you can decide what option works best for you.

Piraeus port is huge so there are several terminals where all the ships dock. Now if I understand it correctly, there is a system in place so depending what island you are arriving from, you will be docking there.

Say, you arrive from one of the Dodecanese islands or Cyclades, you should be docking at terminal E1. If your ferry comes from Heraklion (Crete), your ship will dock at terminal E2 or E3, etc. It seems to be a pretty straight-forward system so you can easily plan how to get from Piraeus port to Athens.

Can you walk from Piraeus port to nearest metro station?

Yes, you can. The length of the walk will depend on where you arrive. Terminal E6 is in the middle and it is the closest one to metro station. It takes about 10 minutes from there by walk.

I urge you to find out where your ship will dock and check a map for the location. Google map shows you exactly how much time you need so that is what I recommend.

Another map with detailed information is provided by the Piraeus Port Website.

But I found it hard to read.

There is also a good map from Blue star ferries, that shows exactly where the terminal/gates.

Or this one: Pireaus port map.

IMPORTANT: I don’t recommend walking from dock E1 to metro station! It is a long and quite scary walk, as after a while of walking, the pathway for pedestrians disappears so you end up walking alongside busy road, crossing at places without designated crossings which makes it extra dangerous.

Apparently, there are some shuttle buses provided so find out if thosealso stop at dock E6. It’s definitely not a walk you want to do with kids/in the heat of summer/ with heavy backpacks/suitcases if you are in a hurry.

Even though I did my research online prior to arriving at Piraeus port, I still failed to understand the size of the place and had no idea that it did not take 10 minutes by walk (like one of the blog posts stated) to get from E1 to Piraeus metro station.

Also bear in mind that your ferry might arrive at a different area (ours did for some reason but they announced it several times while aboard the ferry).

From Piraeus port to Athens by private transfer, taxi, bus or metro

You have to think through what option works the best for you. Private transfer may be the dearest, but a guy will wait for you right outside the ship and will guide you to his car.

When you share with other 3 passengers, the price for getting from Piraeus port to Athens is pretty reasonable. Plus, you get to your final destination quickly. The same goes for taxi. There is plenty of them when a ship arrives, the prices should be a little bit cheaper though.

Just for comparison: We booked a private transfer from port to hotel in Crete for 19 euro. On our way back we asked the front desk staff at our hotel to call a taxi for us. We paid 14 euro for the same route.

Getting from Piraeus port to Athens takes about 25 minutes (or longer with heavy traffic) by both these options.

Taking a bus from Piraeus to central Athens is way cheaper and there is an Express busline X80 (summer only) that takes you to Syntagma, Acropolis and other places.

However, from what I found out, this bus starts at the other end of port (terminal B) which makes it convenient for cruise ships but not for travelers from ferries arriving at terminals E1-E7.

Apparently, there is also a bus 040 that runs 24/7 but after about an hour of research I did not find relevant information on where exactly the stop at port is so if you have more luck, please let us know. It takes about 50 minutes to get from city center to port.

Using metro is pretty straight-forward. You get to the Piraeus metro station, buy a ticket that suits your needs (a single ticket, 24-hour ticket, 3-day ticket …) and get on the train (green line – direction Kifisia) and get off where you need to. A single ticket is valid for 90 minutes.

Is there Uber in Athens?

How much is metro from Piraeus to Athens city centre?

Things to know before arriving at Piraeus port